Gabon is globally known for its wooden masks. Each ethnic group has its own set of masks, with different masks representing different purposes. Masks are generally used ceremoniously, whether it’s for marriage, birth, funerals, harvest season, and other life milestones.  Although it would be relatively easy to buy modern materials, many of today’s mask makers stick to traditional methods by using local woods and materials to create their work. One of the most famous types of masks are the n’goltang created by the Fang tribes. 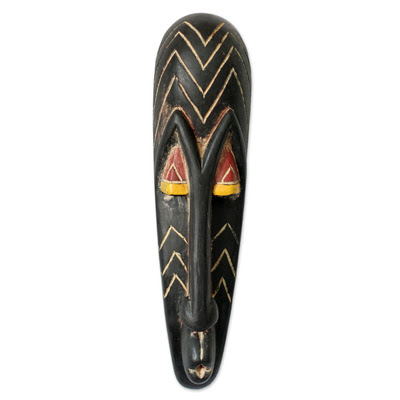 Not only do the Gabonese make these elaborate masks, but they’re also known for their face paint as well. The colors used are based on natural dyes, mainly white, red, and charcoal.

Reliquary figures of the Kota are another art form that has been preserved. Also called Bakota, their communities reside in the northeastern regions of Gabon.  These reliquary figures, mostly made from copper or brass, are an important feature in the Bwete religion.  These figures are viewed as guardians.

Every village values craft work because these are the items used in everyday life. Women – some professional craft workers, some not – make everyday objects with designs unique to their region such as mats, bowls, wall coverings, and other items for their families and the community.

The literature of Gabon has a relatively short lifespan. The older members of each tribe passed stories down to the younger members, retelling these stories for many generations. It wasn’t until the French arrived when written language became prevalent as well. However, it would take until the last 10-20 years before literacy rates would rise; today it’s about 89% (92.3% for men; 85.6% for women).  Even though there is a growing canon of newly written literature in French, there are “raconteurs” in Gabon working to keep the oral traditions alive.  Two of these traditions that are the most documented are the mvett of the Fang peoples and the ingwala of the Nzebis. The mvett not only refers to the musical instrument (similar to a berimbau of Brazil), but also the performer, and the style of epic poetry that is performed.

Up next: music and dance
Posted by Beth Adams at 2:19 PM